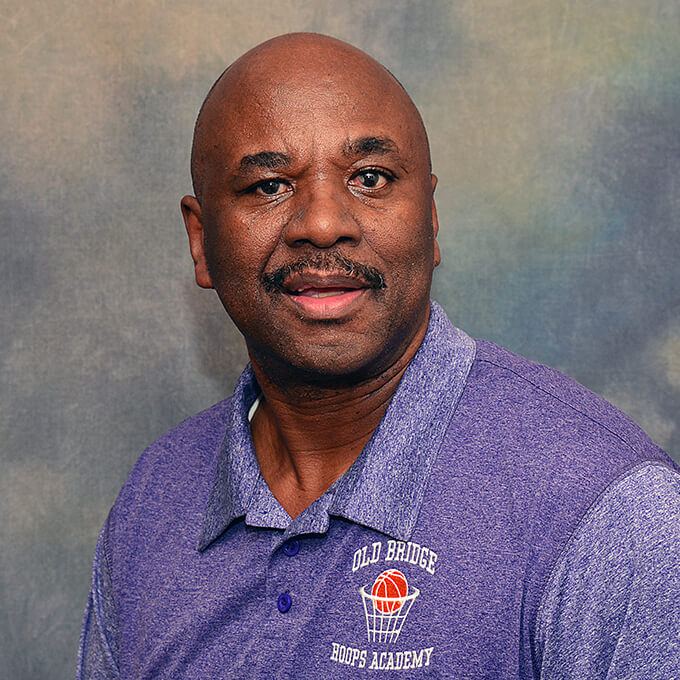 Coach Ian Daley has been the face of Old Bridge youth basketball for over 20 years. His unwavering approach, passion, commitment and sense of pride has produced winning players and teams at every age group. A strong emphasis on fundamentals is the core of his approach to developing young players. In addition to directing camps and clinics in Old Bridge for more than 15 years, Coach Ian leads the off-season training and conditioning program for the Old Bridge boys’ varsity basketball team. He founded and head coached the Garden State Knights AAU basketball program and most recently the Hoops Academy, one of the most competitive AAU programs in the state.
Coach Ian is a graduate of the University of Maryland Eastern Shore where he was a basketball and track standout, twice-earning membership on the NCAA Division 1 All-American Track & Field team. In 1983 Coach Ian became the youngest NCAA Division 1 Head Track & Cross-Country Coach when he entered the coaching ranks at his Alma Mater. During his tenure, he received numerous awards, including “Mid-Eastern Athletic Conference Coach of the Year” honors. He was elected to the University of Maryland Eastern Shore Hall of Fame in 2004. 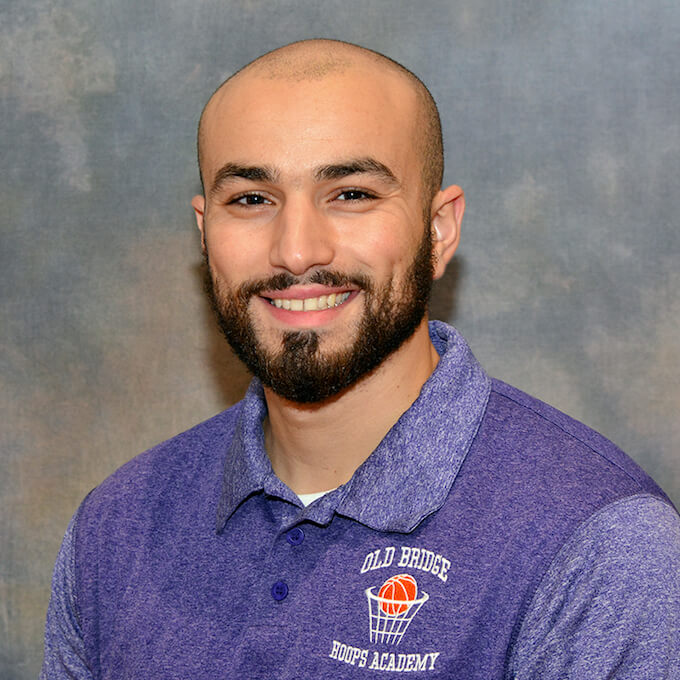 Coach Mehdi brings a wealth of passion and commitment to the program. He played two years of varsity basketball for Old Bridge High School. Afterwards, he led the Middlesex County College basketball team as the team captain for two years. His leadership on and off the court earned him an Academic All-American award and an academic scholarship to Rutgers Business School.
Coach Mehdi prides himself on his involvement with the local youth programs. In 2017 he founded a local basketball program which has since joined forces with the OB Hoops family. He has coached AAU and Travel basketball for over five years. His passion for basketball and mentoring the youth are evident in his commitment to the kids and the community. 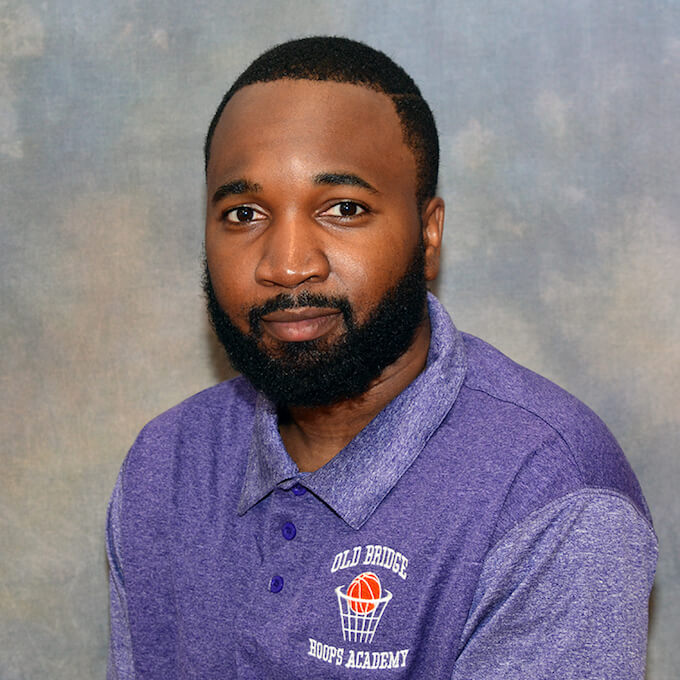 Coach Femi has coached at the AAU and travel level for over five years. A three-year varsity player at Old Bridge High School, he was best known for his sweet stroke, which earned the best shooter in Middlesex County and one of the best in the state of New Jersey! His ability caught the eye of multiple Division 2 and Division 3 schools. He opted to go to William Paterson University where he discovered a love for training and developing the youth. As a successful youth basketball coach, he has won multiple league and tournament championships. Coach Femi prides himself of the betterment of young athletes on and off the court. 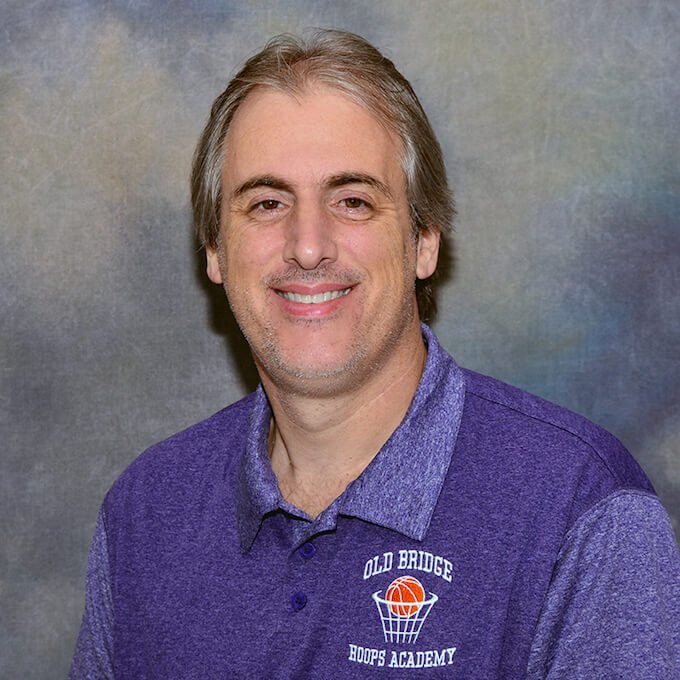 Coach Michael Guidetti is tremendously passionate and knowledgeable about the game of basketball. He has coached the Woodbridge Middle School boys’ basketball team for the last eight years, leading them to the championship game the last four years. His experience includes assisting on a highly respected and successful coaching staff along with leading basketball camps for over twenty-five years. Coach Michael believes that in order to be successful, one must always be willing to work hard in practice and when playing or coaching a game. His passion and desire for the game reflect in how he once played and continues in how he coaches.

Sultan Aminu began his basketball journey as a travel player in Old Bridge, and continued as a 4-year varsity player for Old Bridge High School. During his senior year, he became the first boys’ 1000-points scorer in school history, while leading the Knights to the conference final-four, their first appearance in school history. His on-court play attracted Division I&II interest. Sultan elected to attend DII powerhouse, East Stroudsburg University. While at East Stroudsburg he was a contributor on two championship teams, one of which was a record setting 30-2 nationally ranked team that went on to compete in the NCAA DII Tournament, Sweet Sixteen. After his junior year, he transferred to Ramapo College of New Jersey for his senior year and was a part of another historic championship team that also competed in the NCAA tournament. After graduation, he took his talents overseas where he played professionally in Spain for one year. His return to the states is fueled by his passion for the game and his desire to coach and inspire young student-athletes in his community to be the best they can be on and off the court. 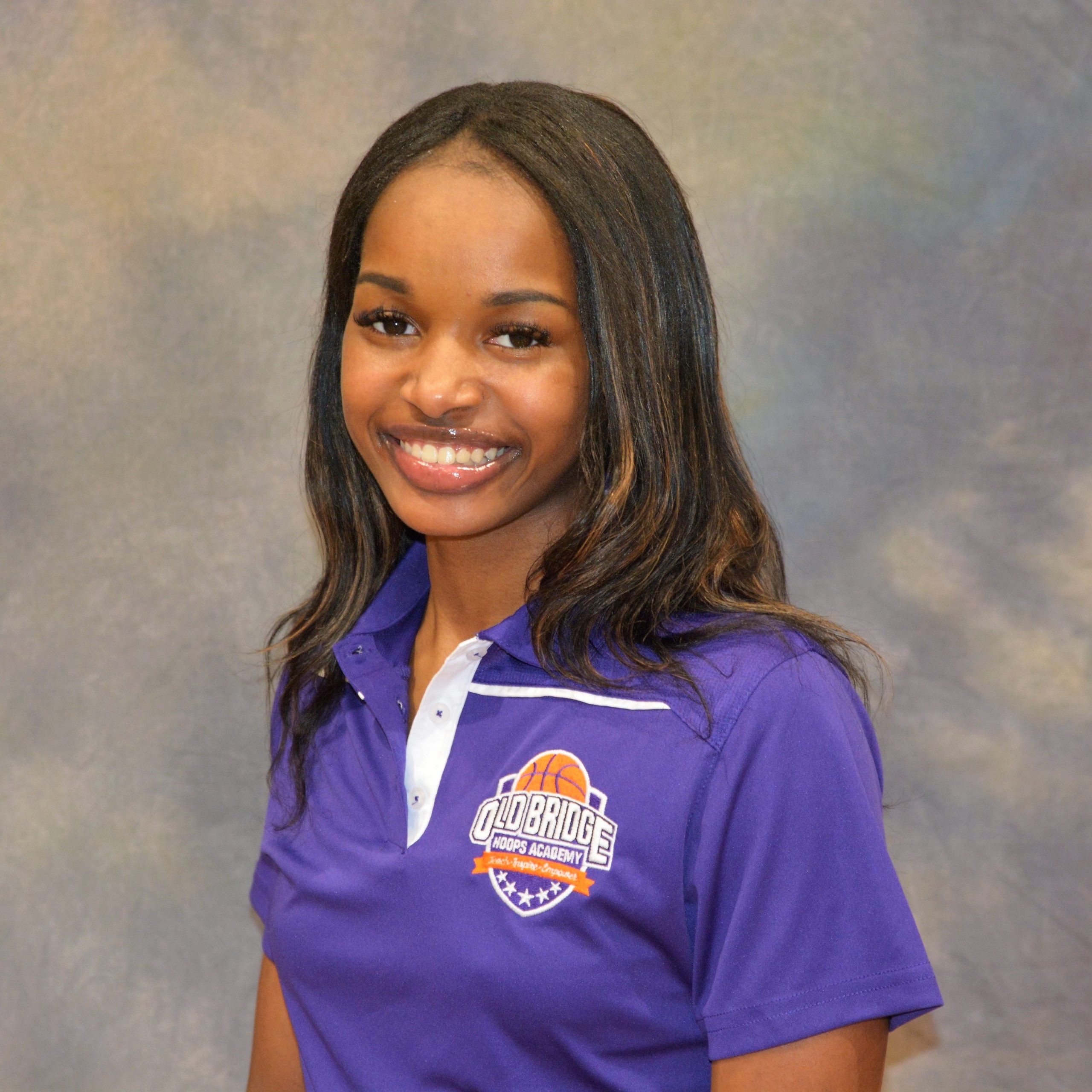 Madison St. Rose, the Carl Sandburg Middle School grad ended her immaculate high school career as the most decorated girls high school basketball player in New Jersey. Her elite level of play was essential to St. John Vianney’s 32-1 season that included a Short Conference Tournament title, a Non-Public A state title and the last Tournament of Champions title in state history. The Princeton commit produced a career best 693 points and averaged 21.7 and 5.1 rebounds per game her senior year. Among her many honors are, 1st team All-State selection three years in a row, 2022 NJ Gatorade Player of the Year, three-time NJ Player of the Year recipient. Madision is the first player to earn this honor in the history of the state. 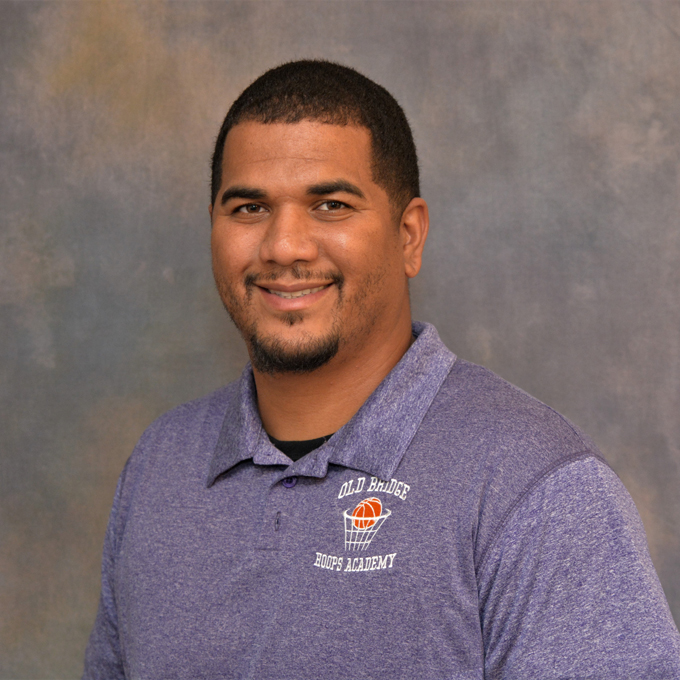 Like many of our coaches, Mike Pineiro comes to our program with a history of basketball involvement both as player and coach. It’s worth noting that Coach Mike played high school basketball for Hall of Fame Coach Bob Hurley at St. Anthony in Jersey City, NJ. He then went on to compete at the collegiate level, playing 2 years at Bloomfield College and 2 years at Ramapo College of New Jersey. Mike is currently serving as the Head Girls Basketball Coach at Mater Dei Prep High School. He has also served as Boys Varsity assistant at Cardinal McCarrick High School, Mater Dei Prep High School (2 Shore Conference Championships 2016, 2017), and St. Joseph’s High School in Metuchen, NJ (1 Greater Middlesex County Championship 2019). 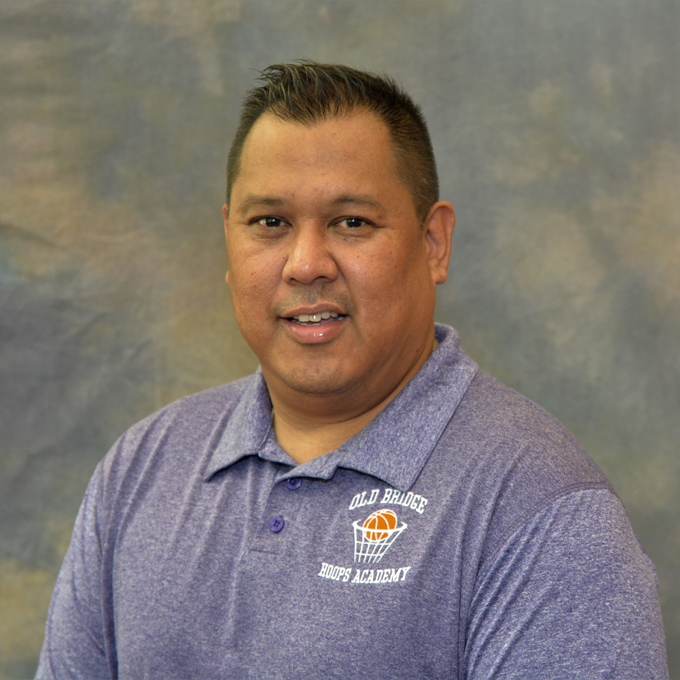 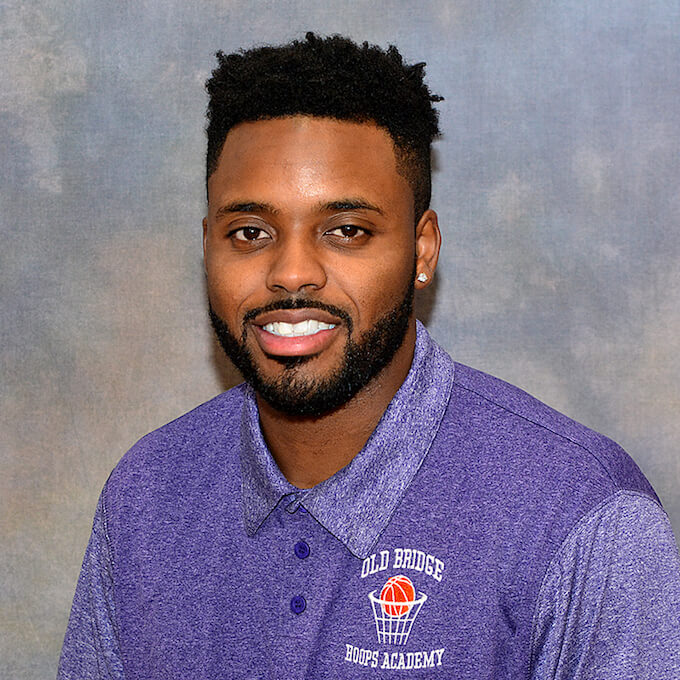 Marcus Crawford is a resident of Old Bridge and graduate of Old Bridge High School, has played at the highest levels of basketball including the Florida International University men’s basketball team. After college, he began working at various camps and clinics and volunteering with the Old Bridge High School boys’ basketball team. Marcus is one of the most dynamic young trainers in the area. His ability to assess, train, mentor and educate young players has been a valuable asset to the Old Bridge Hoops Academy. He is committed to providing first-class training and development for youth basketball in Old Bridge. 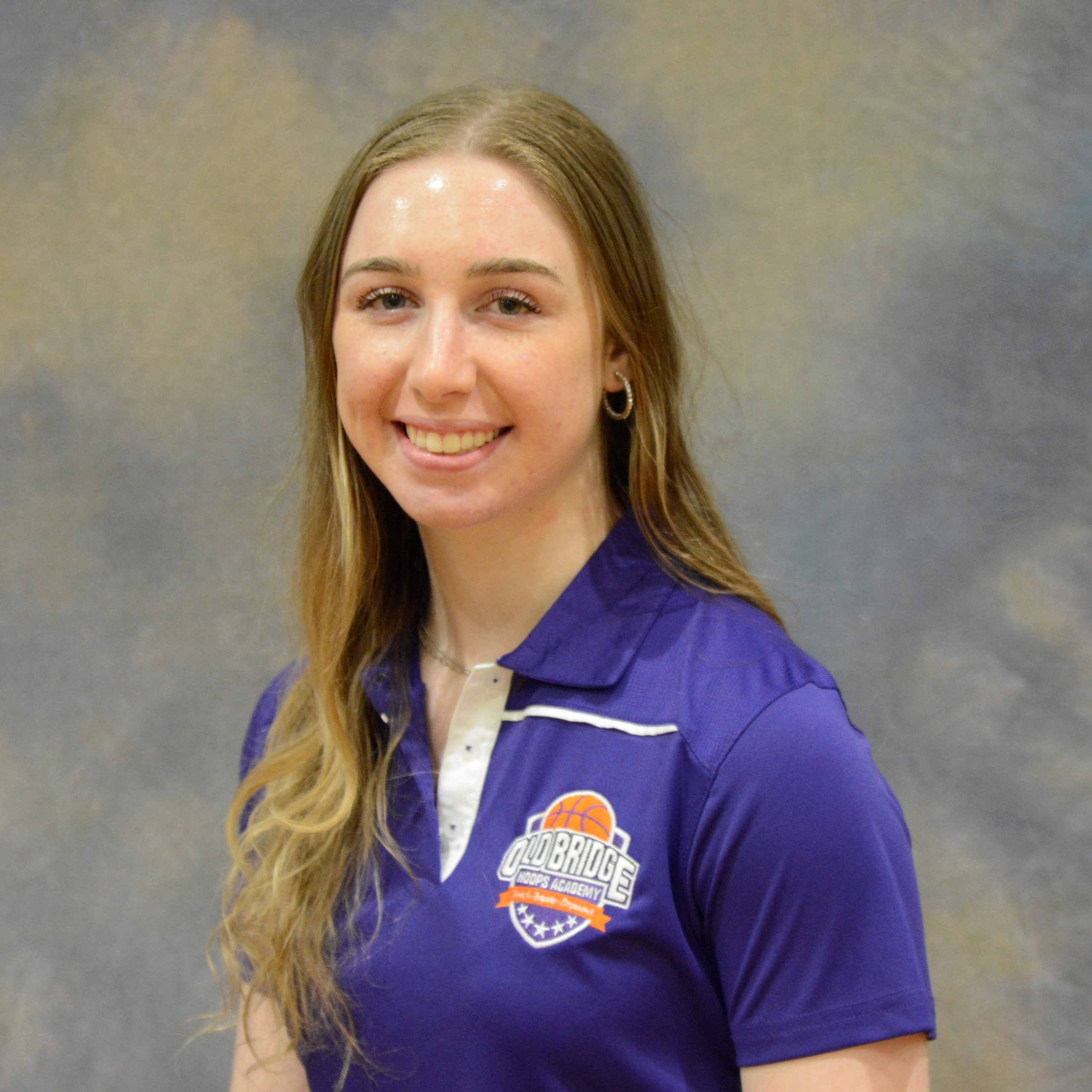 Rachel Kuhl is currently a Division 1 Shooting Guard at Saint Peter’s University in Jersey City. She is also an Old Bridge High School Grad, class of ‘20. Rachel started all 4 years and was a 1,000-career points scorer, finishing her illustrious high school career with 1655 total, second most all time (boys or girls) in school history. In addition to her many accomplishments, Rachel earned All-Red Division and All-Conference honors her sophomore through senior year. She was a McDonald’s All-American nominee 2020.